RECENTLY, an interesting and instructive story spread on Twitter – We can already detect scams in the market and restaurant with our mobile phones

A professor at a science college in Canada sent her molecular biology students to retail chains, fish markets and restaurants to collect fish samples that they sold and served. The students wholeheartedly accepted the hard work of visiting sushi restaurants and fish markets, especially because in addition to a small sample that they had to save and return to college, they could eat the rest of the collected material. So hungry the students rushed for treats of dentex, Atlantic salmon, tuna, diligently writing down what they had bought and eating along the way and setting aside a small piece for their professor.

Almost nothing is as it presents itself

When they recovered from the gastronomic pleasures, another task awaited them – from the samples they had stored, they isolated and sequenced the DNA. And what they read from that DNA greeted them like a cold shower! It turned out that the genetic information in the vast majority of samples did not correspond at all to the type of fish that was on restaurant menus or on store and fish market shelves.

Thus, instead of toothfish, salmon and tuna, students mostly got much lower quality fish on their plates, such as tilapia (one of the lowest quality fish), trout, or even fish that can be dangerous due to possible parasites they transmit, such as escolars, species similar to mackerel. Of the fifteen samples collected, only two of them corresponded to the declaration, in one case the fish was of better quality than the declared one, and one sample of salmon fillets from the fish market caused the biggest surprise. In it, most of the DNA came from – bed bugs! So someone was selling fish in such poor hygienic conditions that they managed to contaminate it with bed bugs so much that their DNA prevailed in the sample. 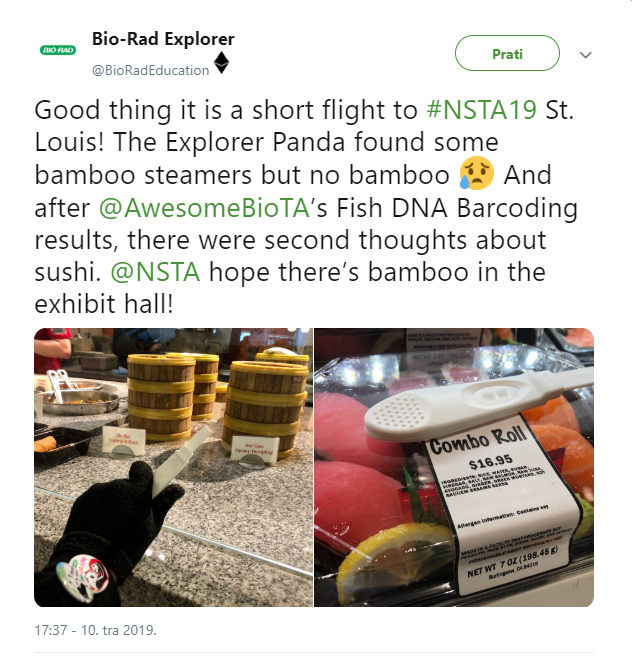 The device and application for iPhone already exist

I said at the beginning that the story is instructive, and for several reasons. The first is that in most cases we still don’t know what we are eating. Often neither the restaurants preparing the food themselves nor most of the intermediaries involved in delivering the food to our plate are aware of this. First of all, because they do not have an easy way to quickly determine the content and quality of the goods they handle, especially if they are large quantities.

Another reason is that the time is soon approaching when each of us will have the opportunity on our cell phone to do an experiment like this done by Canadian students. Already now, in just a day or two, it is possible to get the genetic signature of almost every sample of the living world, including such examples that can give us the most accurate and direct answer to what exactly is on our plate, in water or in the ground, sales. whether someone gives us teak from Bali or beaten beech from Medvednica, boškarin or beef from Poland, Atlantic or Adriatic squid, Lika or Asian potatoes.

Already now one company offers a small device at a price of several hundred euros that you can connect to your iPhone (to the delight of all hipsters and to the regret of Android phone users) and DNA sequencing on it! But the isolation and preparation of DNA for sequencing is not yet at such a level that you can insert a piece of your Kobe steak or broccoli directly into that device. However, I am sure that it will be possible in a few years. And then – panic follows.

And primarily those producers and traders who catch the curves and sell us fake, often decorated with attributes such as “organic farming” or “GMO-free”. So when it becomes common to visit the market armed with a mobile phone with a DNA sequencer, it will soon be clear who wants to deceive us and who offers us exactly what is written on the declaration. Even when it is possible to measure the number of heavy metals and pesticides with a mobile phone, it will be quite clear not only what the food is, but also how exactly it is grown and in what conditions. It will be bad news for all “food-chanters”, but extremely good for consumers and for those growers who sincerely care about the quality of the food they produce. They will also be able to use this technology to be able to monitor conditions in their fields, farms and fish farms in real-time and intervene in a timely manner if they are threatened by any pollution. And those who, under the guise of organic farming, grow their lamb’s lettuce next to the highway, will quickly perish.

Along with greater consumer control of food, the development of technology announces another good news – the moment is approaching when we will have laboratory-grown meat on sale. In addition to more environmentally and ethically acceptable cultivation, this novelty again brings us better control over the quality and nutritional properties of such foods. Read about the meat from the test tube in one of the following columns.