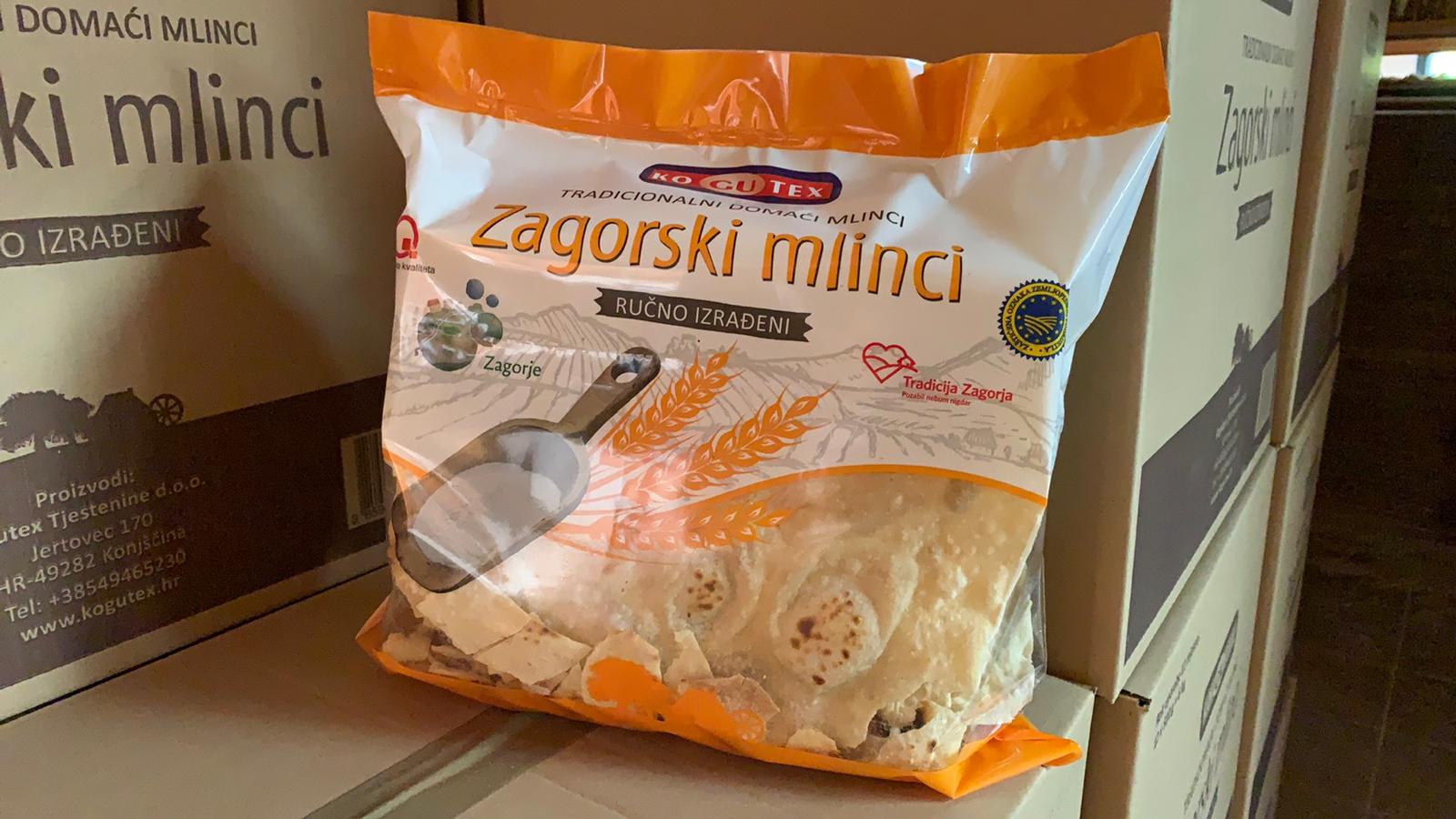 “Well, if we can’t buy them, then I’ll bake them at home on the stove, and we’ll eat real homemade mlinci for Christmas” – this is the sentence that started the avalanche of ideas in the Gorički family in the 90’s. The shortage of mlinci, as well as many other products on the wholesale shelves, prompted them to establish a family business in 1991 called Kogutex, which retails food and other consumer goods. Everything else is history, but also the present and the future

Although the idea of producing mlinci was born back in the 90s, it has matured at the beginning of the 21st century. Not so long ago in 2002, family members decided to expose the production of mlinci to a small experiment. Until then the mlinci were baked exclusively on a wood stove, they tried to get the same baking effect on two homemade gas stoves. They tried and they succeeded. In 2003, the Kogutex family business was deregistered as a company for mlinci production.

Mlinci are the family occupation 17 years in a row now, and although many things have changed in those 17 years, one thing remains the same – the working day lasts from early morning to dusk, more precisely from 5:30 am until 9:30 pm. Because .. someone needs to lead, direct, supervise and take care of the communication with employees and customers, production organization, quality, logistics organization, marketing and promotion. We believe it’s already clear to you what the profile of people here is, and if you’ve been wondering if it’s worth of, is working the whole day, it is! It is worth it because the effort of skilled hands from women from Zagorje is recognized. Slavonian kulen, Pag lamb, Lika potatoes, Dalmatian prosciutto and 22 other products from Croatia are protected at the European Union level and in May 2019 ZAGORSKI MLINCI joined them. All this would not be possible, says Tomislav Gorički, without the golden hands of twelve skilled women in manufacture, along with two drivers, family members and a production manager. 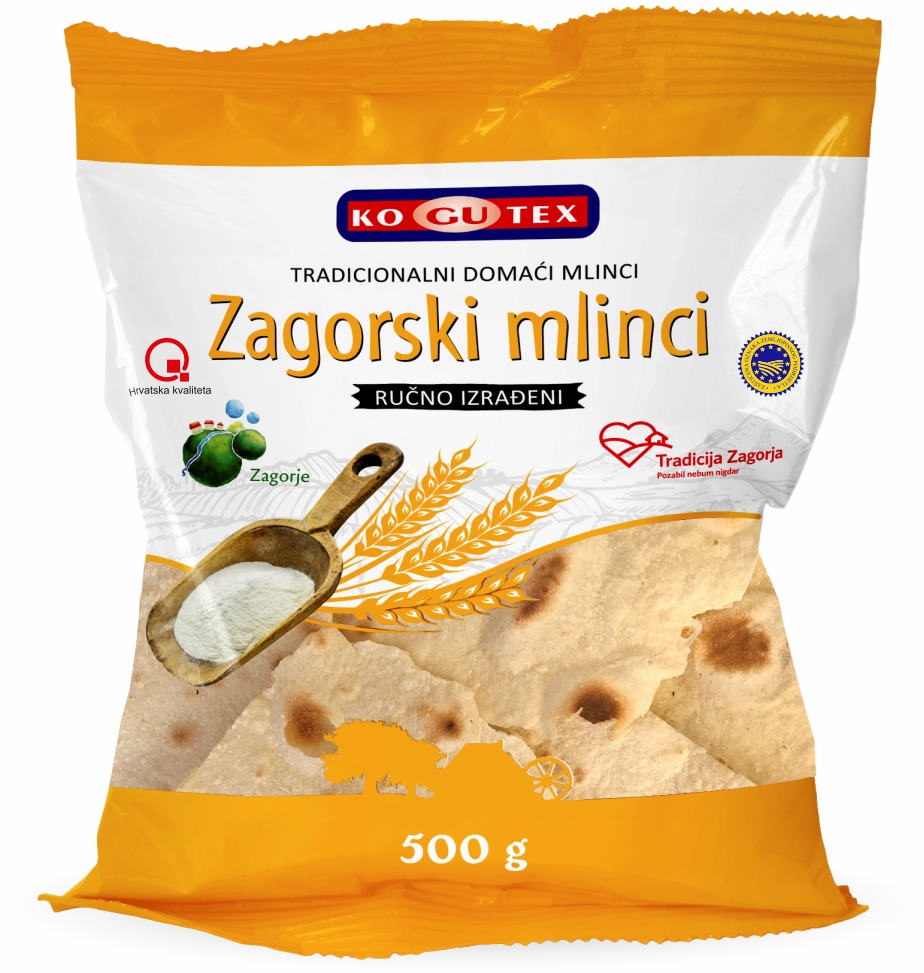 If you want to convince yourself, the doors of their factory are wide open to you every day, without any announcement. There you can witness real art and skill first hand, because not everyone can roll the dough into huge, thin sheets that are then cut into smaller pieces before drying in special ovens! It was this amount of transparency in production that attracted us to them, and we achieved cooperation in record time. Thus, in addition to Zagorski mlinci, on our platform, those who prefer less gluten can find all the information about Rustic mlinci, whose recipe has been developed for quite a long time, carefully and attentively.

Out of  the quantity sufficient for one Christmas dinner, Kogutex has taken a leading position in the market by producing 220 tons of handmade Zagorski mlinci. In addition to being given a protected geographical indication at EU level, their, as some may call it, “Miracle of three ingredients” (water, salt and flour), has led Kogutex to significant recognition. In September of 2019., they became the only producer of Zagorski mlinci in Croatia with the right to use the label ‘’Croatian quality’’.

The secret that makes Zagorski mlinci Kogutex, the only ones who have the right to use that label, certainly lies in the fact that they do not have any additives. The fact that they are made by hand prompted us to go to our nearest Konzum and get them. If you decide to unravel the secret of a special taste, you will follow our example and go and find your 500g pack in the nearest Konzum, Metro, NTL or Prehrana stores. If you invite your whole family to lunch, there is also a 1kg pack. If you forget the name of the manufacturer, don’t worry, the QR code will reveal them 😉

They say they are not lacking laughter nor tears. Critics sometimes bring tears to their eyes, but together they know that they learn the most from them, just like from praises. That’s why they always listen, discern, comment and most importantly, act. They act with a lot of love until a smile wipes the tears away. When the needs and desires of the customers are fulfilled, the smile never leaves their lips.

There was no shortage of laughter in 2010 either, when, Tomislav recalls, they decided to present their Zagorski mlinci at a fair in China. Imagine what interest there was for them? Almost none. And while the Chinese were miraculously amazed and nibbled on mlinci, a video in the background caught the attention of an American, who runs a restaurant in Ningbo. The preparation of the mlinci, the meat and the juice that were shown prompted him to provide our Kogutex people with chicken and ducks the next day. Insuring boiling water was their task. Can you guess what the atmosphere was like around the booth the next day? Even today they are talking about song, joy, delight, photography, inspiration, but also an unforgettable adventure they experienced.

When we asked Tomislav if he ever finds time for rest and family in this crazy schedule, he replied: “On Saturdays, I try to spend as much time with my family as possible, especially in the afternoon, while Sunday is sacred to me and that day I don’t even turn on my cell phone. Well … let me tell you – it’s Saturday morning. Fingers are flying over the keyboard to finish this article as soon as possible. Another sentence and the end. I am slowly putting my laptop on its place, ending the work part of the day and looking forward to the Sunday when my mobile phone will be turned on just to find the recipe on youtube, because – it’s time for Zagorski mlinci! Nabujak with cheese and cream is recommended directly from the kitchen of the Gorički home 😊

The price of food waste