Helena (35) from Pušća: We make pralines with pumpkin cream, they are a hit in Germany and Austria 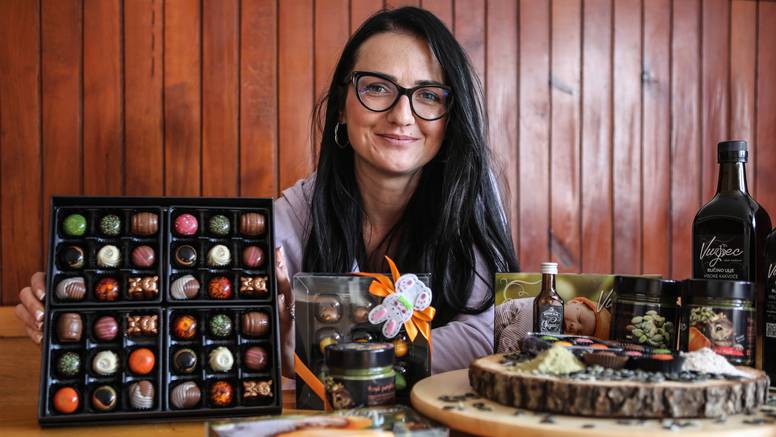 At the family farm in Pušća not far from Zaprešić, they are trying out the possibilities of using pumpkin, which is a very valuable food. Helena makes them with the help of older and younger members of her family

I liked the taste of the combination of pumpkin seeds and chocolate, so I thought of putting pumpkin paste in pralines, describes Helena Vugec Fabek how pralines with pumpkin were made.

Her family has been engaged in agriculture for more than 50 years in Pušća not far from Zaprešić, and it was mostly beef cattle fattening. They decided to expand the business and planted goulash pumpkins from which oil is made. In addition to oil, they also sell pumpkin flour, which they grind in an old mill. Drought and snack pits and the pits were “wrapped” in Belgian chocolate.

It occurred to me why we wouldn’t put pumpkins in the pralines as well. But pumpkin seed paste has a strong taste, so we often make them in combination with vanilla, raspberry, orange, or pistachio. Pralines only with pumpkin are the color of chocolate, and those with additives are colored as in the filling. Pralines with pistachios are greenish, with raspberries pink, with vanilla yellow, and with oranges orange – says Helena.

Pralines for them, according to Helena’s idea and from pumpkins from her family farm, are made by the company Nautilus. It will be made fresh for each customer after ordering and the pralines will be in the shape desired by the customer. Helena (35) is in charge of pumpkins, ideas, presentation, and sales, but she is also helped by other family members. Her father Darko is in charge of planting pumpkins and agricultural work, and Helena’s husband Nikola was in charge of filling and maintaining the pumpkin machine. But the vending machine for pumpkin oil and other pumpkin products has not been working since the beginning of the year due to fiscalization problems. Namely, small family farms also have to fiscalize the sale of their products on self-service devices, and they are stuck in upgrading the software that will make this possible.

When Helena’s pumpkin machine in Zaprešić starts working again, it will be possible to buy pralines on it, as well as other pumpkin products from a small family farm from Pušća. Customers can now buy pralines and other products on the doorstep in Pušća, and Helena can also deliver them to Zaprešić and the surrounding area. Helena jokes that her son Bruno (7) is the main promoter of pralines, he takes them to school, and he gladly accompanies his mother on deliveries. It also helps to put labels, declarations on oils and other products. It is the labels, on which the QR code is, that are the easiest way to order pralines and other pumpkin products that Helena makes with her family.

– All products we sell have a QR code, and when it is scanned with a smartphone, you get all the information about it, but also about our other products and the family farm. Our products can be ordered automatically via this QR code. This makes it easier for me to communicate with customers and I am very pleased with this opportunity – added Helena Vugec Fabek.

QR codes for more than 2,000 family farms and companies are made by the Zagreb company VeeMee. Last year, they placed more than 10,000 tons of food that had a QR code, which guarantees traceability, and “contact the manufacturer” is a new option of their platform.

In addition to the QR code, pralines can also be ordered via social networks. Three pralines in a box cost 30 kunas, a box of chocolates with four flavors of praline and a bottle of pumpkin oil costs 55 kunas, and 100 g of pumpkin seeds in Belgian chocolate costs 30 kunas. He also sends them by mail, and most of them went to Germany and Austria before Christmas.

Without association, there is no survival in agriculture