DAY AT SEA ‘Startup Europe Regatta’ in Split combined business and sports, participants were delighted: ‘The most important thing is to have a well-coordinated team’ 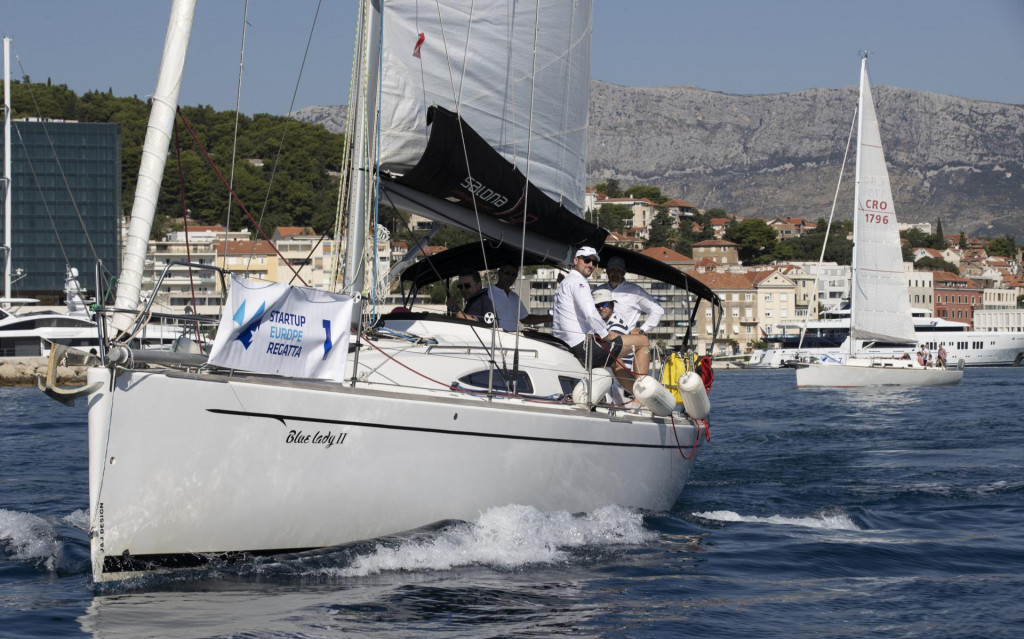 – We saw today how the company functions on the ship, in that small space where a well-coordinated team is the most important link in life and business – the participants of the third conference “Startup Europe Regatta” tell us, as part of which they went to sea.

At the sailing regatta …

Now what it is like to sail, regatta, to be in a different medium, sea, salt and windy, compared to the office one, connected to a computer monitor, the crews of as many as nine “Startup Europe Regatta” sailboats have experienced.

– New experience for sure! This is my first time at the regatta – reveals the sales manager at the startup “WindWard” Mate Kozina.

The 23-year-old from Metkovci sailed together with the director Dživo Jelić (30), a man from Dubrovnik who has a lot of experience at sea. He has been sailing since the age of 8, so it is not surprising that his startup deals with the organization of regattas, he is developing software that makes this job much easier.

And like everyone else, he welcomes the conference, which, in addition to the panel, ensures a direct exchange of experiences – at sea!

– We have shown knowledge, talent, and now we need access to capital, so this regatta is a great tool for getting to know each other, especially investors – says Marijan Mumdžiev, owner and CEO of startup Amodo, a native of Split by mother Dvornik, but by father Hektor – Bulgarian! Who was also employed in our “Slobodna Dalmacija”…

– I grew up in Split, now I am developing a business where we collect data on users’ risks from smart devices, for insurance companies, in Zagreb – laughs Marijan, who still knows something more than others about the ship, but not really about sailing:

– I’ve been to a lot of regattas, but I like to say for myself that I’m a solid one – ballast on a boat!

Everyone else would say that the professional skippers gave them the charm of enjoying the regatta at 6 to 8 knots, on the regatta field outside Ciovo, that they did not know much about sailing, from which direction it blows, which rope it is used for, but how they all in one word simply – enjoyed!

– You see us, we also bought complete equipment, sailing jackets, got ready and that little bit of wind, almost bonaca – joked the duo from Zagreb Domagoj Badrov and Marko Kozjak.

The first photographer, the owner of a 16-meter motorboat but also a radio-controlled D-65 sailboat, sailed in the “optimists” and “49s”, but he only needed to sail on – a cruiser!

– Now I will brag about that experience – 34-year-old Domagoj is satisfied, while his peer, the owner of the startup “VeeMee” Marko explains:

– Last year, I sailed for the first time at this Frana regatta (op. a. Frane Šesnić organizer) and fell in love with the sea and boats. It’s a superb experience, but don’t ask me anything about the regatta rules, I don’t know that! But that’s why I will tell you all about my job, which is the control of Q-codes on food, as part of the project “From field to table”, we take care of quality food offered to customers.

And since Marko has no idea about the regatta rules, he has among the nine crews that sailed, and those who are extremely experienced – even world champions! This is Zvonko Jelačić, winner of numerous medals in radio-controlled sailing boats of the One Meter class, and a successful owner along with Josip Marasović, the company “Sailboat RC”! The two of them know a lot about sailing and regattas, but also business, and this combination, along with the exchange of experiences and concluding future deals, was the goal of this regatta.

– Helping to develop startups is our task, to be at hand for young innovators in the IT industry. That is why we are here – Damir Brčić, head of the Split-Dalmatia County for ICT, co-organizer of the event held in Split, is also concise!

This time he did not sail to the sea, but that is why he kept everything under the control of Frane Šesnić as the “alpha and omega” of the whole story – both the startup and the regatta. At sea with the help of the Race Committee – Nikola Aljinović and Marko Mišura, who were not too strict judges!

Since sailing is just a tool for socializing and business arrangements at the third “Startup Europe Regatta”.

– We have something to show, Split is ideal for such events, a combination of business and sports, nature and the sea. All in one, and we rounded it all off by hanging out on the boat, on the high seas. The results of the regatta itself, however, are not so important – underlined Šesnić at the end, announcing his arrival in Split next year.

„A jar of health“ that will make you cry